Welcome to the Align Podcast, hosted by me, Aaron Alexander. This is a place where we focus on optimizing your mind, body, and movement through exploring unconventional approaches and unique viewpoints on all things health, wellness, and life. I'm joined by top wellness experts and world-renowned thought-leaders, including Byron Katie, Bruce Lipton, Aubrey Marcus, Jim Kwik, Marriane Williamson, Ben Greenfield, Robb Wolf, Shawn Stevenson, Abel James, Mark Sisson, Wim Hof, James Clear, Zach Bush, Gabby Reece, and many more. Get ready for deep conversations that open you up to new perspectives and ways of life that will ultimately take your mental, physical, and emotional wellness to the next level. If you love this podcast, I would love for you to connect with me on Instagram, @alignpodcast.
Facebook Twitter RSS Feed Subscribe in Apple Podcasts
Align Podcast
2022
June
May
April
March
February
January

Born in the Phillipines, Callen spent the first fourteen years of his life overseas in countries like India, Pakistan, Lebanon, Greece and Saudi Arabia, before moving to the U.S. He went to high school in Massachusetts and earned his B.A. in History at the American University in Washington D.C.

Bryan Callen has spent the last 17 years in Los Angeles fighting traffic because that’s where he seems to find the most work. (Bryan Callen is also writing this but making it seem like someone ELSE is writing this by referring to himself in the 3rd person) Callen got his start as an original cast member of MAD TV. He then went on to play numerous roles on the small and big screen including, “Old School” “Bad Santa”, “Sex and the City”, “Entourage,” “Californication”, “7th Heaven,” “King of Queens,” “Stacked,” “Las Vegas,” “West Wing,”“News Radio,” “Significant Others,” “CSI,” “NYPD Blue,”“Suddenly Susan,” and “Frasier.” He recently finished a two season character arc on USA’s“In Plain Sight”

Callen is not a famous actor but sometimes people look at him and scream “Bilson, ” since that’s the character he played on several episodes of CBS’s “How I Met Your Mother.” His most recent TV role was Captain Frank Dashell, leader of the Undead Task Force, in the short lived but critically acclaimed MTV comedy, “Death Valley”. He’s been recognized for that role exactly 4 times but who cares since he’s been recognized over one million times (I’m guessing) as EDDIE, the Middle Eastern owner of a wedding chapel in a little movie called THE HANGOVER. Not to mention his role as Samir, in HANGOVER II where he played basically the same exact character only Samir had thick, curly, hair and darker skin which is actually a good look on Callen considering his Irish/Italian heritage has left him with a ruddy complexion and thinning, mouse-brown hair. His most recent role on the big screen was in the Lion’s Gate drama WARRIOR where he did an excellent job playing himself.

Between acting gigs Callen spends his time power lifting, taming lions, vanquishing evil and making people laugh as a stand up comic. That’s why he can currently be seen on SHOWTIME performing a stand up comedy special called MAN CLASS.

What exactly IS MindPump? MindPump is an online radio show/podcast that has been described as Howard Stern meets fitness. It is sometimes raw, sometimes shocking and is always entertaining and informative. Your hosts, Sal Di Stefano, Adam Schafer and Justin Andrews have over 40 years of combined fitness experience as personal trainers, club managers, IFBB fitness competitors and fitness thought leaders.

The fitness world is filled with charlatans and snake oil salesmen pushing the latest and greatest (and sometimes downright dangerous) workout programs, supplements and faux science on the unsuspecting masses. Sal, Adam and Justin use MindPump as a platform to shed the light of TRUTH on health, fitness and a host of other topics. By listening to each episode of MindPump, you will be able to absorb over 40 years worth of workout wisdom in record time so that you can cut through the BS and experience the absolute fastest way to reach your health and fitness goals. 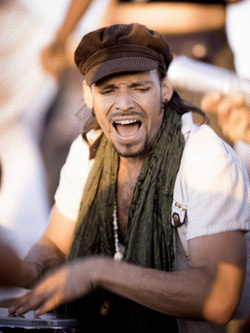 “My art is that of holding sacred space. The degree to which I can hold space musically or in silence, on a stage or with a client on the massage table, determines if magic will happen. Whether we are dealing with the space between notes or the space between breaths, the healing power of my work happens when I get out of the way and allow Spirit to move through me.”
- Poranguí


As a live musician, world soul artist and one-man orchestra Poranguí weaves ancestral songs and indigenous rhythms from around the globe. Creating his performances from scratch using looping technology, Poranguí’s live grooves range from meditative to dance party, moving the body, lifting the spirit, and transcending the divide between performer and audience. An evening with Poranguí might take you on a journey from deep, earthy didgeridoo grooves to high-vibe ecstatic Brazilian beats to blissful African kalimba lullabies. Serenades and storytelling to beat boxing and booty shaking: Together, these make an unforgettable experience.

As a DJ, Poranguí performs funky tribal world house sets that integrate live instrumentation, a hybrid of his organic indigenous sound with a potent electronic bed that moves large dance floors. And in sound design and media production roles –  including film soundtrack contributions  – Poranguí’s work is informed by experience with photography and filmmaking.

As a therapeutic bodyworker providing individual sessions in private practice, Poranguí draws on his academic background in neuroscience, his family legacy in the healing arts, and his training as a licensed massage therapist. His “Myorhythmic Release” technique combines the healing properties of sound, movement, and breath, supporting clients from all backgrounds and health conditions in finding freedom from the limitations and suffering of old patterns and trauma.
Poranguí’s integration of these practices – music, healing arts, and arts education – makes him a valued resource for and contributor to retreats, arts centers, school programs, festivals, and special events.

For Poranguí, this rich practice of music, healing, teaching, performance, and creative collaboration represents the intersection of journeys both personal and professional.

“Growing up among such different worlds (cultural, linguistic, spiritual) challenged me as a child. Now I look back and see the blessing it afforded me, to serve as a bridge for others. It taught me to appreciate the salient threads that connect us in our collective human experience. It informs my art and pushes me to find new ways to tell the stories of our ancestors in a way that we can all hear it – in the midst of our contemporary culture.”

Born in the U.S. to Swedish parents and growing up in Spain, Carl Paoli learned from an early age how to connect to and be conscious of others. Carl's childhood passion and enthusiasm for physical activity lead him to explore many different sports such as snow boarding, skiing, wake boarding, water skiing, karate, among others. It was his love for gymnastics, however, that would greatly shape his definition of hard work and determination.

Carl soon rose to become an elite gymnast in Spain where he trained and competed for over fifteen years. Throughout his gymnastics career he received many accolades, including a National Gold Medal for Vault. Carl studied Environmental Science at Universidad Miguel Hernandez and specialized in Genetic Engineering and Coral Reef Ecology. After university, Carl returned to the U.S. to pursue his career in marine biology.

Carl's mind was never far from his appreciation for sport and fitness, and he reentered the world of gymnastics in 2004 in San Francisco. He now works as a Strength and Conditioning Coach and runs his own practice called Naka Athletics, which specializes in all level physical preparation and representation of action sports athletes.