Welcome to the Align Podcast, hosted by me, Aaron Alexander. This is a place where we focus on optimizing your mind, body, and movement through exploring unconventional approaches and unique viewpoints on all things health, wellness, and life. I'm joined by top wellness experts and world-renowned thought-leaders, including Byron Katie, Bruce Lipton, Aubrey Marcus, Jim Kwik, Marriane Williamson, Ben Greenfield, Robb Wolf, Shawn Stevenson, Abel James, Mark Sisson, Wim Hof, James Clear, Zach Bush, Gabby Reece, and many more. Get ready for deep conversations that open you up to new perspectives and ways of life that will ultimately take your mental, physical, and emotional wellness to the next level. If you love this podcast, I would love for you to connect with me on Instagram, @alignpodcast.
Facebook Twitter RSS Feed Subscribe in Apple Podcasts
Align Podcast
2022
June
May
April
March
February
January

An Introduction to Dan John

Dan John has spent his life with one foot in the world of lifting and throwing, and the other foot in academia. An All-American discus thrower, Dan has also competed at the highest levels of Olympic lifting, Highland Games and the Weight Pentathlon, an event in which he holds the American record.

Dan spends his work life blending weekly workshops and lectures with full-time writing, and is also an online religious studies instructor for Columbia College of Missouri. As a Fulbright Scholar, he toured the Middle East exploring the foundations of religious education systems. Dan is also a Senior Lecturer for St Mary’s University, Twickenham, London.

His books, on weightlifting, include Intervention, Never Let Go, Mass Made Simple and Easy Strength, written with Pavel Tsatsouline as well as From Dad, To Grad. He and Josh Hillis co-authored “Fat Loss Happens on Monday.”

In 2015, Dan wrote Can You Go? on his approach to assessments and basic training. In addition, Before We Go, another compilation akin to Never Let Go became an Amazon Bestseller. 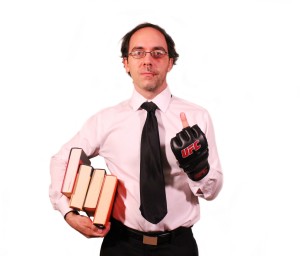 Daniele Bolelli is a writer, martial artist, university professor, and podcaster. He was born in Italy and currently lives in Los Angeles.

Check out Danieli at http://www.danielebolelli.com/

So, tell us about the guy behind Mark’s Daily Apple!

I’m a former elite endurance athlete who has made health and fitness my life’s work. In my younger days, I was on the track toward medical school for a while (BA in Biology from Williams College), but I got detoured by a different track—literally—and a dream of making the US Olympic team for the marathon. As the decades passed, I realized that my calling was as an independent researcher, critical thinker, motivator, and communicator—to get people to take responsibility for their health and fitness (often in the face of flawed conventional wisdom that can lead even the best-intentioned astray), and to inspire people to be open-minded, passionate, and enthusiastic about leading a healthy, happy, fit, balanced, active lifestyle, with the least amount of pain, suffering and sacrifice possible.

Living Libations is a line of serums, elixirs, and essentials oil that nurture beauty, enhance the immune, and promote healthy good oral care. Nadine is the author of Holistic Dental Care: the Complete Guide to Healthy Teeth and Gums.